This morning I rode a 20km time trial – my first ever competitive cycle race. For this event I had purchased a set of TT extension bars – something I had sworn I’d never do just a few months previously. I’ve now learnt never say “never” when it comes to cycle purchases. I also made a few small adjustments to my bike to get it ‘TT-ready’.

Bike after – spot the difference

I doubted that any of these minor adjustments would actually make any difference but it seemed right to take it seriously. I feel fairly certain that I would ‘never’ go so far as to use a disk wheel or a TT helmet but I need to be careful with these types of predictions! I rode the event with Mike. As it was both of our first time-trials we were categorised as ‘novices’ and started very early in the day. I was the 5th and he was the 21st starter out of 300 racers.

We managed to get in a practice lap before the event started. I was surprised by the number of corners and climbs on the thee-lap route so was glad to have discovered these ahead of time.

I was held by the starter as the time approached. And then, “5, 4, 3, 2, 1” and I was off. I accelerated steadily, got into a decent gear and settled onto the bars. I got out of the saddle for the steepest climbs, and I didn’t feel comfortable cornering on the TT bars, but generally it went well and I felt like I’d pushed it 100%. Midway though the second lap I started to feel nauseous from the exertion and looked down to see my heart-rate had hit 190bpm. I took this as a signal to ramp it down just a touch.

I overtook numbers 1 and 2 quite early as well as several of the later starters on my second and third laps. On my final lap I was overtaken by somebody who had just started. I kept him in my sights and was slowly gaining on him when he lost control and crashed on a corner. I flew past trying not to get too distracted as he tumbled across the grass. Near the end of the final lap I overtook number 3 who had an aero helmet and disk wheel combination. However on a flat section he edged back past me, possibly making use of his better equipment. Fortunately the last kilometre was a slight climb and I managed to get ahead of him to cross the line in a time of 33 minutes & 50 seconds. This gave an average speed of 35.3kph (22mph) which felt good for the course. 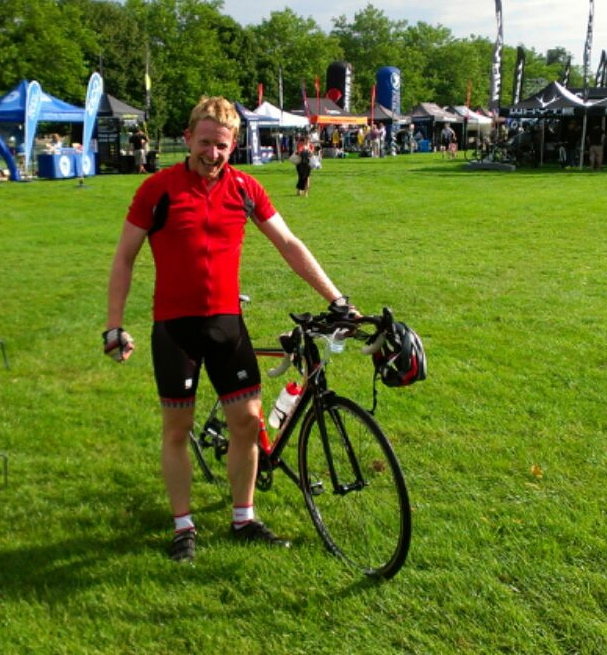 The second man across the finish line looking knackered but satisfied

I waited around for Mike to finish who reported a time of “sub-34 minutes” so we will have to wait for the official times to see how we both placed. Exhausted but happy we made our way to the start line to watch how the pro’s do it and to wonder what sort of times they’d achieve over the course.