Over the course of this blog I’ve written a handful of cycling product reviews – I try to buy as few cycling products as possible so generally don’t have too much to review. Unfortunately I am now in need of a new rear light as the old one broke. It was a ” Knog Blinder 4 Circle Rear LED” and I can’t say I was too disappointed when it died. I haven’t been overly impressed by it and now have good reason to purchase a replacement. Hopefully I’ll make a better choice this time.

The Knog Blinder – style over substance?

First the positives – it’s very bright and lives up to the name ‘Blinder’. It has about 5 functions, one being constant and the other 4 being various flashing sequences. Arguably 3 of these are superfluous but maybe some people like to have a choice. It’s easy to clip onto the seat post via a rubber band and metal clip, but it probably wouldn’t attach securely to smaller tubes such as the seat stays if you have a saddle bag. And you certainly couldn’t clip it onto a saddle bag or mudguard. It’s rechargeable via a flip-out USB connector. Onto the negatives. Battery life has always seemed too short. It’s difficult to know exactly how long it lasts, but it’s somewhere between 2 and 3 hours. I’ve been on a few 3 hour rides where I’ve come home to find the light not working. Not only does this seem unsuitable to a sport where people often cycle for several hours, but it also means you need to charge it after every ride. When I was using it for commuting in the Winter I used to charge it twice a day, once at work and again at home just to be sure. This was obviously a nuisance. The USB connection is also a bit temperamental and there have been times when it was plugged in but not receiving charge. The final and terminal flaw with the design was that the rubber band clamp perished. I think I’ve had the light for 18 months. In that time it’s had good use and been subjected to lots of rain, but still, for a light that costs somewhere between £25 to £30 you’d expect better. 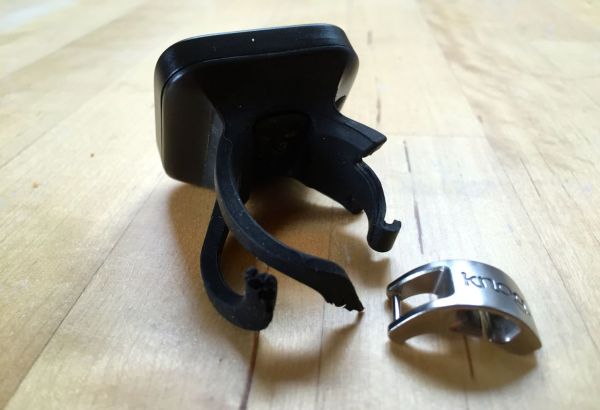 I also own a Knog front light, and similarly this has a battery life of about 2 hours. So, going forward I will be looking for a light with a longer battery life. And probably not a Knog. Clearly all of that removing and reattaching to charge this one up has contributed to it wearing out. If anyone can recommend a good rear light (or has better experience of the Knog Blinder) then please feel free to respond in the comments section below.

* After writing this post, I checked out the Knog website and read that all of their products have a 2 year manufacturers guarantee. So I sent the product back to the distributer and was issued a full refund. So despite not being completely happy with the quality of this particular Knog product, I can’t fault the integrity of the company.

One thought on ““Knog Blinder” review”